Hajime Shiomi was born on 1st Oct 1904 (Meiji 37) to father Saishi from Sashima island and Mother Mann from Mihara. He had one sibling, bigger brother Ichiro, born on 1902.

10 years after his father Saishi migrated America, he got on a ship “Chicago-maru” departing from Yokohama to Seatle alone at age of 13 and after 19 days of voyage, entered America on 10th July 1918 (Taisho 7). He came out from an island without electricity and must have witnessed brick buildings of Seatle at the end of the voyage. 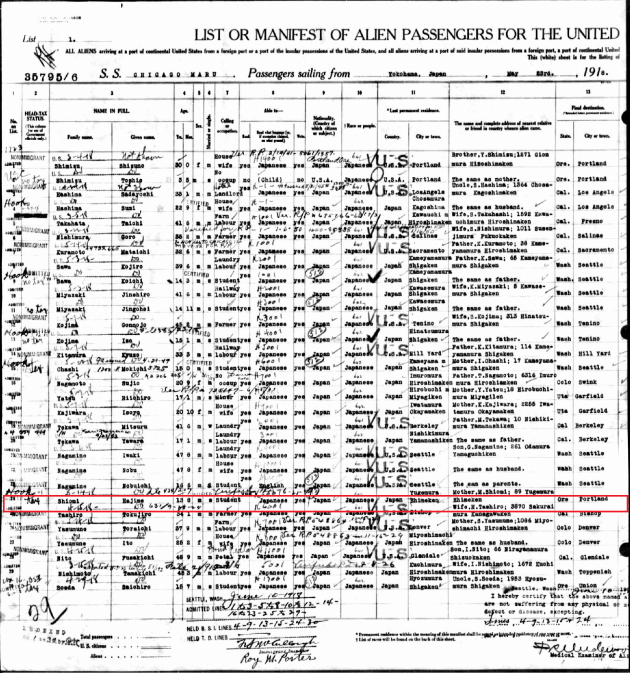 Passengers from Hiroshima and Shiga stand out, but there are some variety, some from Shizuoka, Kagoshima and Miyagi.

Incidentally “Chicago-maru” was built in 1910 (Meiji 43). At that time it crossed between Hong Kong and Seatle Tacoma, via Kobe and Yokohama. Those must have been the time when immigrants from China were banned by government and marked steep drop while Japanese immigrants still increased despite its restriction. After 1920 its route changed to Brazil and it carried lots of immigrants to Brazil.     After that, the ship became under requisition by military and sunk by American submarine off Taiwan in October 1943.*

Hajime used Robert as his English name and entered to Failing Elementary school. The school was founded by Josiah Failing, 4th major of Portland Oregon and was known for its prestige.** An article of Robert winning “the best letter or composition” contest on Memorial day, is posted on local paper Oregonian, 16th June, 9 months after his admission.(Photo2) Saichi, his father who dumped his son who does not even know ABC to local school must have given him a Spartan education, and Robert must have worked hard. 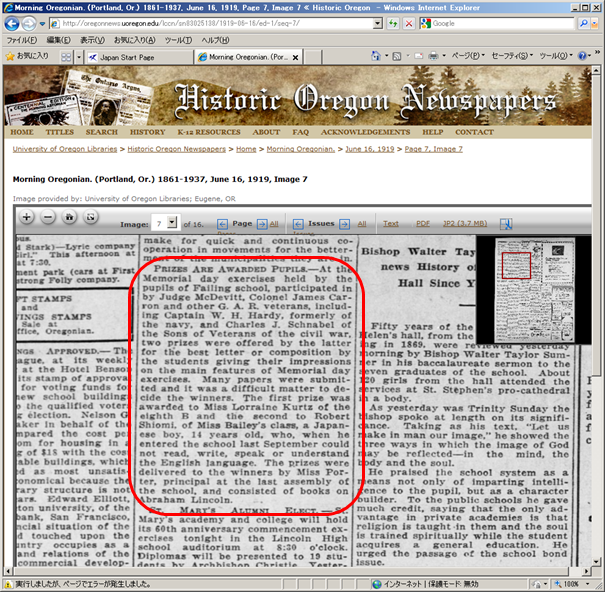 “Second(prize) to Robert Shiomi, a Japanese boy, 14 years old, who, when he entered the school last September could not read, write, speak or understand the English language”.

Last year graduation photo dated Jan 1920 was founded in an attic of house of Shiomi. (Photo3) There is one Asian boy with his mouth tight shut amongs 40 or so well dressed anglosaxon boys and girls. The photo must have been sent to his mother Mann, who was keeping house in Japan. 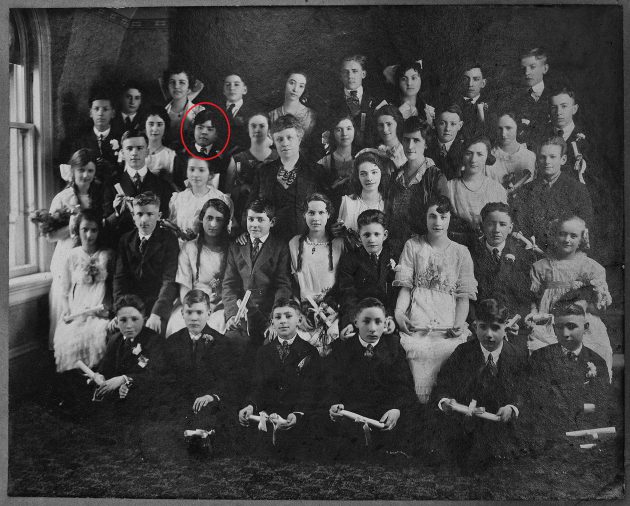 History of Chicagomaru(From DATA BASE) (from Imperial Japanese Navy

Saichi Shiomi, father of Robert Hajime Shiomi was born in Sashima village Ochi-county Ehime prefecture, (now Kamijima-cho) in 1881(Meiji year 14). According to family registration, Saichi inherited his family estate at age of 6, so his farther Saikichi must have passed away at an early age. His mother Hana, woman as she was, brought up her sons, Saichi and Jinsaku. She lived out her natural life at age 91. Stone pagoda to celebrate her 88th birthday still remains at Yahata shrine. Saichi married a girl called Mann Yamada from Mihara city Mitsugi-cho at age of 23. According to the island’s old villager, Saichi fell in love with Mann who came to sell fish in Sashima.

On 2nd October 1907, Saichi left his wife and children and immigrated to America via Mexico. He was 26, his wife Mann 24, his elder son Ichiro 6 and his younger son Hajime 3 at that time. （New evidence shows a possibility that Saichi’s first emigration was when he was 16. Still under search)

Since Islands of Seto Inland Sea is close to Hiroshima, so called “prefecture of immigrants” it was not uncommon for islanders to immigrate at that time. In 1900, annual immigrants from Japan to mainland America reached over 100,000 producing conflicts and American government has started to restrict immigration. So it was already difficult to immigrate directly to West coast in 1907. Many immigrants aimed America via Canada or Mexico and Saichi seem to have followed the route. Where in Mexico port he landed is not known but immigration card was found in archive in America showing that he entered El Paso, Texas (Photo 1) and got on a train to Vancouver. At that time, there were some Sashima villagers migrating to Steveston,*1 a town outskirt of Vancouver, famous for its Salmon can industry. So he may have parted with his fellow townsman on his way.

The reason why he landed on Portland where there is not many Japanese is unknown but on address page in diary of his brother Jinsaku dated 1917 states “Brother c/o Panama Hotel No.52 N.4th St. Portland Oregon U.S.A” So this must have been where he stayed. Speaking of the hotel, Panama hotel in Seattle is famous but it seems that its affiliated hotel have existed in Portland.*2 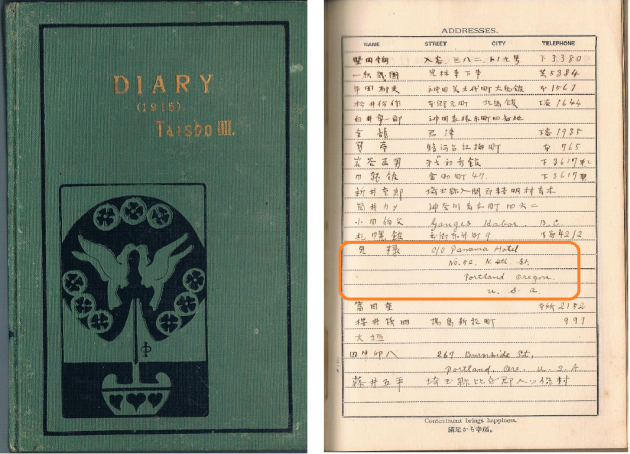 Japanese immigrants in Portland was often engaged in railway construction or farming, but his registration card dated 12 Sept 1918 shows that he is a labor of Press Steel Box and later in National Census in 1920 showed that he is a “Laborer” in “Machinery shop”. Does that mean that he stepped up his career as he learned English?

Saichi welcomed his second son Hajime to America in 1918(Taisho 7), and he himself returned Japan in 1920s after more than 10 years of migration. Old villagers recollects that after his return he seemed to have decided that he have worked lifetime worth in America and spent his time reading and did not work at all. English novels found in barn of Shiomi House may have been his. It was surprising to find so many old English hard covers in an old barn of an old house in such a remote island.

Saichi died in 20th Jan 1971 (Showa 46) at age of 90. “I myself have met him with my great grandfather at age 3,” recollects Nobuko Nishimura, lady of House of Shiomi.”I only have vague recollection of an old man with Kimono sitting at edge of veranda.

Additionally, life of Japanese American in Vancouver at the time has been cinematized in “The Vancouver Asahi”.(director Yuya Ishii)

Used to be regular hotel for single Japanese male worker at that time, and there was Japanese style bathhouse “Ashidateyu” in the basement. The hotel still holds appearance at the time and runs cafe on 1F. The hotel has been named as national treasure by National Trust.

Reference book: “Hotel on the Corner of Bitter and Sweet.” written by Jamie Ford, translated by Ippei Maeda, published by Shueisha Inc. 2011, a best seller selling over 1.1million and was awarded best “Adult Fiction” book at the 2010 Asian/Pacific American Awards for Literature.

Panama hotel in Portland is predicted to have had similar lodging. Local newspaper “Morning Oregonian” holds classified ad by Mr. Tsugawa presumably Japanese American who asks for farm to rent 50 to 150 acres land fit for Potatoes. (Photo 4) He must have been working as a day laborer while looking for his own farm. Panama hotel may have been contact point for such people. Life of Mr. Tsugawa is also interesting. 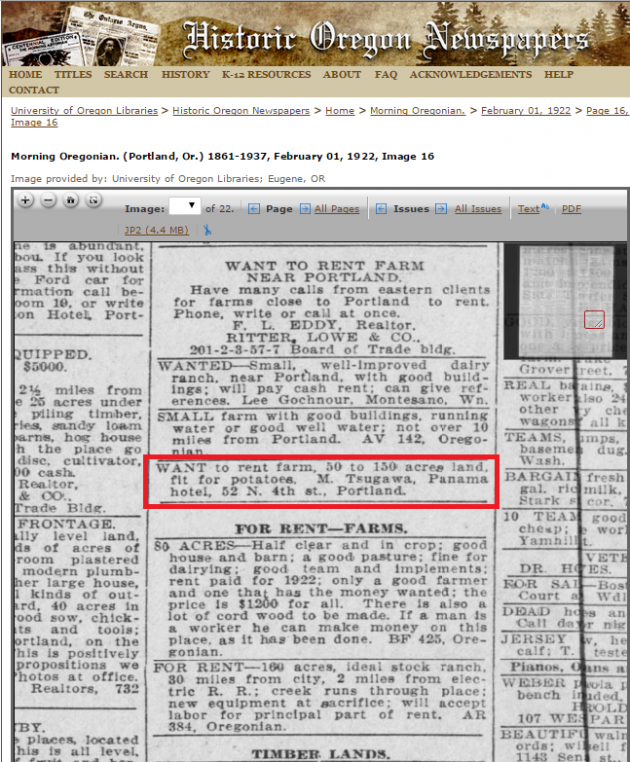 From the end of the Meiji era to around 1930’s, hundred of thousands of Japaneses had emigrated. Many Sashima island people chose Steeveston, B.C. Canada mainly, near Vancouver city, some went to U.S..

Dr. Robert H. Shiomi was a Japanese American so called “ISSEI” who was born at Shiomi house on October 1st, 1904. He immigrated to U.S. when he was 13 years old and become a brilliant doctor.

Suffering from internment during WWII, he had spare no effort to promote better understanding between U.S. and Japan by supporting a lot of of art organization in Oregon statement and students from Japan throughout of his life.

Step by step, I will add articles about him. Hope you enjoy them! 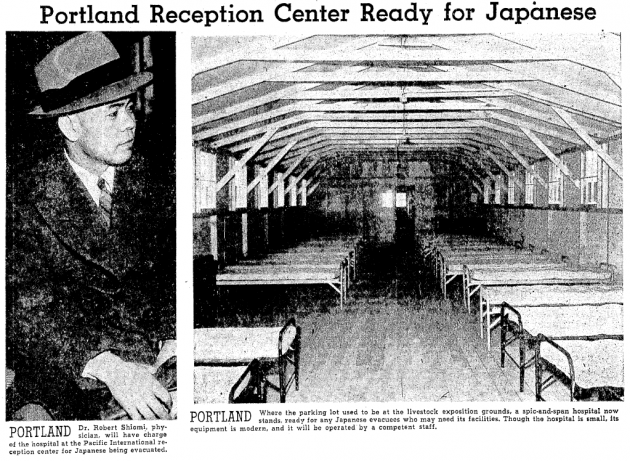 “Dr, Robert Shiomi, physician, will have charge of the hospital at the Pacific international reception center for Japanese being evacuated”
2May1942Oregonian