Efforts to transform family home of Japanese-American (Nikkei) doctor who has been put into war relocation center during World War 2 and lead rocky life, into base for international exchange has been initiated in an islet of Seto Inland Sea, Japan.
The late doctor’s name is Hajime Shiomi. He was born in Sashima islet (Kamijimacho Ehime prefecture) in Seto inland sea. At age of 13, he followed his father who emigrated for work in Portland, Oregon and worked his way through medical department of University of Oregon.
After becoming a doctor, Mr Shiomi, has one time served as administrative director of US Association of Nikkei & Japanese. He also donated scholarship to promote mutual understanding of Americans and Nikkei in1941, right before the outbreak of war between Japan and the United States.
After the war he examined Nikkei people who faced living difficulties for free as well as supporting students from Japan. Students he supported included late Ms. Yoko Matsuoka, grandchild of Soseki Natsume, who later became an emeritus professor of Oregon University. Mr. Shiomi died in 2004 in United State at age of 99.
His family home of Sashima is around 1076 sqft. and is now owned by Mr. Shiomi’s brother’s grandchild, Ms. Nobuko Nishimura (50), an office worker, along with her mother. It has long been vacant and since its 60-70 years old, it suffered from age deterioration. At first, Ms. Nishimura considered selling the house, but as she looked into footprints of Mr. Shiomi through old American newspaper etc, she made up her mind to succeed his intention for international goodwill, and make it a guest house.
When she called for caretaker of the guest house at committee of Kominka (traditional Japanese folk house) reactivation, she was responded by Mr.Hiroshi Takeuchi (31), a Japanese teacher from Hachioji-city, Tokyo. He has been teaching Japanese using internet and has travelled around 30 countries. “I have always wanted to show the beauty of Japanese country side to people abroad.” He recollects.
This spring, in order to prepare the opening of the guesthouse, Mr Takeuchi has moved to Sashima and started to work as temporary staff at local town hall. The guesthouse is named “House of Shiomi” and will open this fall. It will hold maximum of 10 people, and is scheduled for renovation such as separating 320sqft Japanese style room into 2 rooms, one for male and the other for female, increase number of bathrooms etc.
Ms. Nishimura turns her thought to Mr.Shiomi “I think peace based on mutual understanding of different races was my granduncle’s life wish”. Mr. Takeuchi also enthusiastically comments “I want to make this guest house a house which makes foreigners love Japan for life by single visit.” 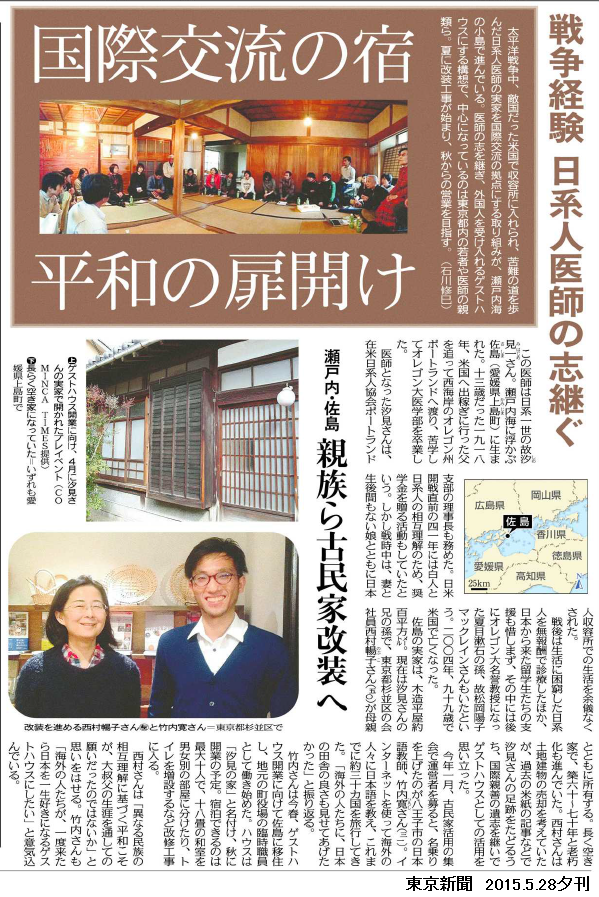